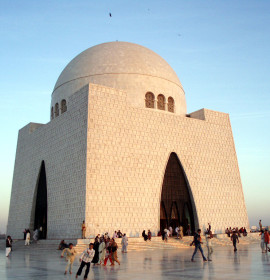 Mazar-e-Quaid, also known as the Jinnah Mausoleum or the National Mausoleum, is the final resting place of Quaid-e-Azam (Great Leader) Muhammad Ali Jinnah, the founder of Pakistan, as well as his sister, Māder-e Millat (Mother of the Nation) Fatima Jinnah, and Liaquat Ali Khan, the first Prime Minister of Pakistan. Located in the Jamshed Quarters neighborhood of Karachi, the mausoleum (Urdu: مزار‎ (mazār), of Persian origin), completed in the 1960s, is an iconic symbol of Karachi throughout the world. It is one of the most popular tourist destinations among foreign visitors to Karachi. The location is usually calm and tranquil which is significant considering that it is in the heart of one of the largest global megalopolises. The glowing tomb can be seen for miles at night. Official and military ceremonies take place here on special occasions, such as on 23 March (Pakistan Day), 14 August (Independence Day), 11 September (the anniversary of Jinnah’s death) and 25 December (Jinnah’s birthday). Dignitaries and officials from foreign countries also visit the mausoleum during official tours.

The Mausoleum building was designed by famous architect Yahya Merchant. It is made of white marble with curved Moorish arches and copper grills reset on an elevated 54-square-meter platform. The mausoleum is located in a 53-hectare park and the building has a footprint of 75 by 75 m (246 by 246 ft) with a height of 43 m (141 ft), built on a 4 m (13 ft) high platform. In each wall is placed an entrance. Fifteen successive fountains lead to the platform from one side and from all sides terraced avenues lead to the gates. The cool inner sanctum reflects the green of a four-tiered crystal chandelier gifted by the People’s Republic of China. Around the mausoleum is a park fitted with strong beamed spot-lights which at night project light on the white mausoleum. In the interior of the grave complex, there are three graves in a row and one to the north. The northern one, which is decorated with a series of black floral design at the base, belongs to Miss Fatima Jinnah, Quaid-e-Azam’s sister. Out of the three graves, the northern one belongs to Liaquat Ali Khan, the first Prime Minister of Pakistan. The extreme southern grave belongs to Sardar Abdur Rab Nishtar. In the middle lies buried Nurul Amin, who rose to be the Vice-President of Pakistan. All these graves are made of Italian white marble, and they are of the box type, like the sarcophagus of Jinnah, placed on a triple base. But the sides of these graves are tapering inward while that of Jinnah are diverging outward. These are all plain graves, except that of Mohtarma Fatima Jinnah, which has a basal floral ornamentation.

From Wikipedia, the free encyclopedia