The video intro for
Minar-i Pakistan, literally "Tower of Pakistan" 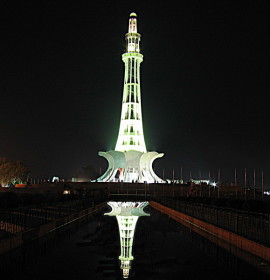 Minar-e-Pakistan Minar-e-Pakistan, literally “Tower of Pakistan”) is a public monument located in Iqbal Park which is one of the largest urban parks in Lahore, Punjab, Pakistan.[1] The tower was constructed during the 1960s on the site where, on 23 March 1940, the All-India Muslim League passed the Lahore Resolution, the first official call for a separate homeland for the Muslims living in South Asia, in accordance with the two-nation theory. Design The tower reflects a blend of Mughal, Islamic and modern architecture.

The tower was designed and supervised by Nasreddin Murat-Khan, an architect and engineer hailing from Daghistan.[2] The structural design was performed by Nasreddin Murat-Khan (a qualified engineer himself), assisted by Engineer Abdur Rehman Khan Niazi, who was working as Structural Design Engineer for Illeri N. Murat-Khan & Associates. Approved by the President, the design was built by Mian Abdul Khaliq and Company.[citation needed] The foundation stone was laid on 23 March 1960. Construction took eight years, and was completed on 31 October 1968 at an estimated cost of Rs 7,058,000.

The money was collected by imposing an additional tax on cinema and horse racing tickets at the demand of Akhtar Hussain, governor of West Pakistan. Today, the minaret provides a panoramic view to visitors who can climb up the stairs or access the top by means of an elevator. The parks around the monument include marble fountains and an artificial lake. Structure The base is about 8 metre above the ground. The tower rises about 62 metres on the base, the total height of minaret is about 70 metres above the ground. The unfolding petals of the flower-like base are 9 metres high. The diameter of the tower is about 9.75 meters. The rostrum is built of patterned tiles, and faces the Badshahi Mosque. The base comprises four platforms. To symbolise humble beginnings of the freedom struggle, first platform is built with uncut Taxila stones, second platform is made of hammer-dressed stones, whereas third platform is of chiselled stones. Polished white marble at the fourth and final platform depicts the success of the Pakistan Movement.[3] Mr. Mukhtar Masood, a prolific writer and the then–deputy commissioner of Lahore, was one of the members of the Building Committee.