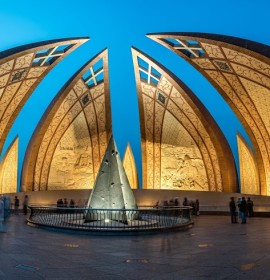 Pakistan Monument in Islamabad, is a national monument representing the nation’s four provinces and three territories. The Monument has been designed to reflect the culture and civilization of the country and depicts the story of the Pakistan Movement, dedicated to those who sacrificed themselves for future generations. From air the monument looks like a star (center) and a crescent moon (formed by walls forming the petals), these represent the star and crescent on Pakistan’s flag.

Map of Pakistan Monument In Islamabad